The whole Muay Thai vs kickboxing situation probably has you a bit confused.

Is Muay Thai the same as kickboxing?

To be honest, it’s a bit of hazy area, but in this post,  I will fully explain all of the differences (and similarities) between Muay Thai and kickboxing.

Kickboxing as an umbrella term

Firstly, it’s important to know, that although Muay Thai and kickboxing are totally different sports… Kickboxing is now commonly used as an umbrella term to describe any combat sport that involves striking with punches and kicks… including Muay Thai!

I did warn you that this a confusing topic 😊

So, that means that the term “kickboxing” could include a host of sports such as Muay Thai, American kickboxing or Japanese kickboxing. 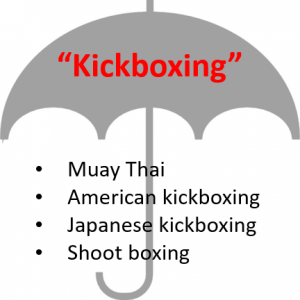 However, this umbrella term is used by the general public.

For martial arts enthusiasts who want to be a bit more specific, there is also a distinct difference between traditional Muay Thai, and kickboxing styles like American kickboxing.

The more specific definition divides the sports like the table below.

The major factor that differentiates Muay Thai from kickboxing is where, when and how they both started and evolved.

Muay Thai is a lot older than kickboxing.

Muay Thai was developed in Siam (now Thailand) during the 1500’s, or possibly even earlier.

Thai soldiers were trained in Muay Thai for battlefield combat, and it was used against enemy armies during wars with neighbouring countries.

Known as “the art of eight limbs” it uses punches, knees, kicks and elbows to strike opponents, as well as clinching and sweeping tactics.

As it gained popularity in Thailand, it transitioned into the ring sport we know today, with sanctioned fights starting to take place in the 20th century – as safety measures such as gloves and rules were slowly introduced.

The term kickboxing refers broadly to Japanese and American style kickboxing which both originated around the 1960’s and 70’s (very new compared to Muay Thai!)

This type of kickboxing developed as a blend of martial arts such as karate, western boxing and even elements of Muay Thai.

As martial arts; kickboxing and Muay Thai are similar, but there are still many differences.

As a ring sport, the two have some very big differences, which I will discuss in more detail later in this post.

Another big differentiator between Muay Thai and kickboxing are the promoters and organisations who host fights in the separate sports.

As you can probably guess, Muay Thai promotions happen mainly in Thailand, whereas kickboxing promotions tend to be based in Japan and the USA with fights happening all over the world.

Muay Thai has a slightly different set up to western boxing and MMA – with belts and rankings being attached to stadiums as well as organisations.

The Lumpinee stadium in Bangkok is the biggest and best-known Thai boxing stadium in the world. They host fights 3 nights per week and have their own ranking system and belts across different weight classes.

The Lumpinee champion belt is the holy grail of Muay Thai, and considered to be the highest accolade a Thai boxer can achieve in their career.

Rajadamnern stadium is another hugely popular stadium in Bangkok which also has it’s own ranking system and belts.

The WMC is the international  governing body for Muay Thai, with a worldwide ranking system and belts for a range of weight classes.

Here are some of the better known kickboxing organisations.

In kickboxing the promotions are in charge of all of the rankings and belts – A bit like the UFC in MMA.

K-1 is the most popular promotion in kickboxing, and they host kickboxing events at venues across the world.

Fighters come from a wide range of countries, and one of their best known events is the K-1 World Grand Prix tournament.

Glory is another well known and respected name in the kickboxing world, hosting some of the biggest fights in the sport globally.

Another factor that distinguishes Muay Thai form kickboxing are the rules applied to the ring sports.

This is another slightly grey area, as in kickboxing, rules can differ slightly from promotion to promotion.

However in Muay Thai, the rules remain largely the same across all organisations.

Most kickboxing promotions don’t allow any elbows to be thrown, and most don’t allow knees either – or they limit the types of knees which can be thrown (For example, some allow knees to the body, but not to the head).

The clinch is a big part of Muay Thai with knees, elbows, and throws being delivered from within the clinch.

In kickboxing, clinching is very limited.

Whilst fighters are allowed to clinch in kickboxing, the referee will step in and break it up after a few seconds – in a similar fashion to western boxing.

Due to the differences in history and rules, the fighting styles tend to be slightly different, which you will notice if you watch a few fights.

You may be wondering, “Have any Muay Thai fighters moved over to kickboxing?”

And the answer is, yes they have.

Perhaps the most famous Muay Thai to kickboxing crossover is Buakaw Banchamek.

Buakaw was already a prominent Muay Thai fighter in Thailand, but made a switch to kickboxing where he now fights all over the world and has won numerous K1 championships.

So, Muay Thai and kickboxing are very similar sports, but if you look closely there are some big differences.

The history, promotions, and rules are the biggest differentiators between the two combat sports, and these affect the fighting styles hugely.

They are both exciting sports to watch, but if forced to choose which one to train, I would personally pick Muay Thai every time. 😊

Hi, I’m Darren Mitchell and I run the blog here at Best Muay Thai. I’ve trained Muay Thai for over 15 years at various gyms across the UK, Europe and Thailand. I’ve experienced lots of different training styles and been lucky enough to learn from some great coaches and fighters.

I aim to provide Muay Thai fans with helpful information for training along with honest reviews and buying guides for training gear.